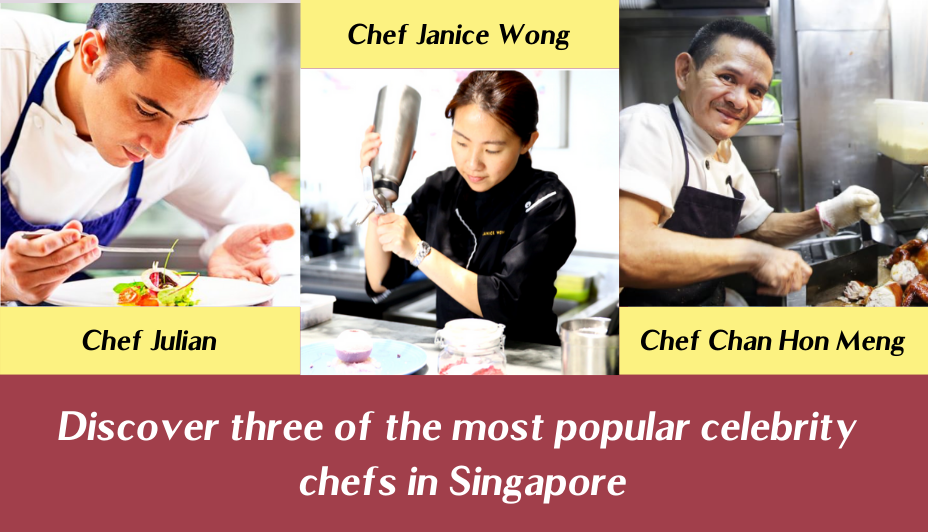 Discover Three of the most popular celebrity chefs in Singapore
News

Singapore has a thriving and ever-growing food culture that makes it a popular destination amongst food lovers worldwide. While Singapore is renowned for its tasty street food, premium restaurants led by talented chefs have also gained popularity. Singapore’s unique and diverse food culture, coupled with the love of food, has created amazing chefs who are respected internationally for honing their crafts and putting the country on the global food map. In this blog, we explore the stories of some of the most popular celebrity chefs in Singapore.

Chef Julian is one of the most beloved and respected celebrity chefs in Singapore. He runs the Odette, a modern French eatery that offers a gourmet fine dining experience that sets his restaurant apart from the crowd. Created in tribute to Chef Julian’s grandmother, the Odette is a modern twist on the culture and heritage of days long past.

Chef Julian’s success can be attributed to retaining a part of his culture and refining it to exceptional levels. The best part of Singapore’s food culture is its diversity. If food is tasty and healthy, it is accepted as part of Singapore’s culinary world. Chef Julian focused on his culture and strengths to offer the best French cuisine available in Singapore. Even though it is very different from South Asian cuisine, Chef Julian was still able to make his mark on Singapore’s culinary identity.

Chef Chan Hon Meng’s food has made its way into the stomachs and hearts of people over a career lasting more than three decades. Chef Chan, today one of the most renowned celebrity chefs in Singapore, originally started his hawker stall to provide an alternate version of the beloved Hainanese chicken rice Singapore is famous for. His unique style of preparation that was perfected over his long career has earned Chef Chan’s hawker stall a Michelin star, which created history as the world’s first hawker stall to receive the prestigious award. Chef Chan’s stall has been garnering the love of people even before the Michelin star. Still, it has people queuing up in long lines to sample the simple yet exceptional food that is a tribute to what makes Singapore’s food culture so good.

Chef Chan found success by sticking to his roots and resonating with Singapore’s food culture. He put a new spin on old classics while establishing his work as part of the food culture that surrounds Singapore. Simple food, when executed well, is unparalleled. This is a large part of Singapore’s culture, which Chen Chan recognized and elevated to new heights.

Chef Janice Wong is known as the dessert Queen of Singapore. She is known for pushing the boundaries of what we expect from desserts by creating aesthetically pleasing and delicious works of art. After honing her skills training under experts in Europe, Chef Janice has been named the best pastry chef in Asia by Restaurant magazine and is now making international waves with her work.

Chef Janice found success by pushing her work to its limits to create new and exciting dishes that people have never experienced before. She spoke to their child-like wonder by offering so much more than just a meal but an entire experience.

FairPrice Has Wallet-Friendly X’mas Takeaways, Including $3 Japanese Oysters And Sets Under $50